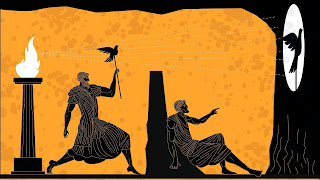 Yesterday I found myself participating in a most interesting dialogue about Plato's "Allegory of the Cave". Plato's beautiful allegory, it seems, has become a central discussion point in many philosophical dialogues. It has also served as a premise upon which many of your modern story tellers describe the challenge of escaping our clouded, indoctrinated version of reality to see the world for what it truly is.

I shall not provide an overview of the allegory here, save to say that although Plato presented it in my voice, it was not my idea. It was his. But I would like to mention a point raised in our discussion. Our dialogue turned to the notion of science and its attempt to provide certain knowledge. Now, I am not convinced that the scientific process will ever provide the sort of certainty my friends were talking about. That, my friends, sits more in the realm of mathematics and philosophical reasoning. Still, science does seem to give us an increasingly detailed explanation of reality. Interestingly, my discussion partners suggested that this is not necessarily a good thing. They claimed that our search for certainty is misguided. Perhaps, they said, it is better to embrace a level of uncertainty. As if doing so contributes to our humanity.

At this point I asked "Does this mean we should not attempt to turn from the shadows on the wall of the cave? Should we remain fixated, staring at the cave wall?" As I saw it, they were falling into the very trap that Plato's allegory warns us of, i.e that we are so enamored by the shadows on the wall, we shun any attempt at gaining knowledge and moving out of the cave. My question prompted a certain amount of back tracking and defense. But I think it revealed a tension between the desire for knowledge and the seduction of the shadows.

I very much enjoyed our dialogue. There was much discussed and I am pleased to say that I learned a great deal. I learned that after all this time, people still find it immensley difficult to turn their back to the cave wall.