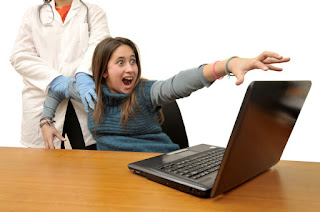 Last week I met an interesting young person, named Ella, who was most distressed. She had been cut off from the Internet and this was causing her anxiety. Her Internet exile was imposed by her parents and her subsequent anxiety, it seems, resulted from her isolation from friends, who themselves remained online. I took it upon myself to help this young person examine her anxiety.


After some dialogue we discovered that she had deduced, through reasoning, that she must be on the Internet. The fact that she had been cut off was therefore causing her emotional stress. Her reasoning took this form:

P1. (premise) I must be with my friends

P3. (premise) My friends are on the Internet


Following this simple deduction, Ella was deducing an emotional response:

P4. (premise) If I must be on the Internet, then being cut off from the Internet is the worst thing that has happened to me

C2. (conclusion) Being cut off from the Internet is the worst thing that has happened to me (from C1, P4)


This conclusion (C2) was clearly accompanied by feelings of anxiety, and upon further examination, we uncovered feelings of anger directed at her parents:

P5. (premise) If my parents are responsible for the worst thing that can happen to me, then they are unjust and are the worst parents in the world

P6. (premise) My parents have cut my Internet

C3. (conclusion) Therefore, my parents are unjust and are the worst parents in the world (from C2, P5, P6)


Ella's conclusion (C3) was the cause of her anger towards her parents. By Zeus, there was much for us to discuss. And discuss we did. We started by looking at her first premise. I was most interested to learn its origin. As it happens, Ella had deduced this premise from prior reasoning which can be expressed as:

P1. (premise) I must have the approval of my friends

P2. (premise) If I am not with my friends, I will not gain their approval


This conclusion formed the first premise of Ella's reasoning and was thus the primary cause of her emotional distress. I therefore decided to examine the premises that were used to deduce the conclusion that she must be with her friends.

It seems to me that demanding approval from friends is irrational. Friends are people who decide for themselves how they feel about others. In demanding that they must approve of her, Ella was assuming their lack of autonomy. It also seems to me that we wouldn't always want our friends' approval. To illustrate the point, I asked Ella to imagine that she was intoxicated and attempting to drive home. I asked whether, in such a situation, she would demand her friends' approval. Would she really want them to approve of her behavior in such a circumstance? She wisely said "no", and thus realized that sometimes she would not want the approval of her friends. In some cases disapproval can help one correct poor behavioral choices. We had thus called into question the "must" in her first premise. Instead, Ella suggested that she "wants" the approval of her friends. A softer, but more realistic way to describe the reality of friendships.

Ella's second premise indicated a direct causal relationship between not being with friends and not gaining their approval. We discussed this and concluded that her friends' approval does not necessarily depend on her being with them. There may be some correlation, but no definitive causal relation. Having disarmed this faulty premise, her conclusion "I must be with my friends" was no longer deduced, and thus her subsequent reasoning was no longer valid.

Refuting the underlying premise was a necessary first step for Ella to see her situation differently. Nevertheless, we continued to examine the rest of her reasoning. The second premise in her main argument: If I must be with my friends, then if my friends are on the Internet, then I must be on the Internet seemed faulty to me. I asked if she would think this premise were true if time spent on the Internet was causing her to go blind, perhaps because of the contrast of the screen. She wisely conceded that spending time online with friends is not worth losing her eyesight over, thus her premise was exposed as being false. This made her argument deductively invalid, which means her conclusion (C1) no longer followed from her premises. She also realized that her premise (P4) was false for much the same reason. There are much worse things than being cut off from the Internet.

I encouraged my friend to examine another premise (P5) if my parents are responsible for the worst thing that can happen to me, then they are unjust and are the worst parents in the world. As far as I could tell, this premise was causing feelings of anger and as such needed to be examined. Even if the rest of Ella's reasoning had survived examination, the falsification of this premise would relieve her anger. We discussed what bad parenting looks like. We then discussed good parenting. We concluded that good parents act in accordance to what they believe are the best interests of their child. Having reached that conclusion, we decided that if her parents believe the Internet is harmful, removing that harm would make them good parents. They were, after-all, acting with just intentions.

There are many layers that sit beneath day-to-day life problems. But the examination of these layers can help people see things in a different light. My friend was still annoyed at being isolated from her friends. But it was short term. And, as it turned out, her friends did not abandon her. Instead, they arranged a trip to see a movie. After the movie they spent time together in a cafe, dialoguing face-to-face, just as we ancients did.