Memory and the Internet 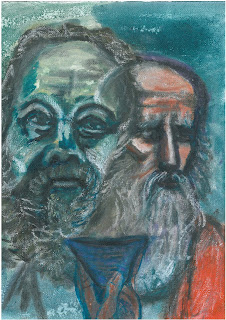 The written word is arguably the most significant invention in our history. But I always held it in suspicion. Back in Athens I argued that the written word can give people the illusion of knowledge when none exists. It is very easy to recite information from a written passage without understanding exactly what it says. I see this frequently when I use this new tool, the Internet. People respond to questions by copying passages of written text, but when probed, they reveal that they don't know what they have quoted.

Another reason for suspicion is that the written word is static. You can't interrogate it. If I read an item of information in a book, I cannot ask a question. The book sits there silent. I have always argued that learning best occurs through dialogue.

A third reason for my suspicion involves the impact writing has on memory. If I can off-load thoughts from my mind onto paper, or into the Internet, then I don't need to remember them. There are some contemporary philosophers such as Andy Clark and David Chalmers who claim that the very act of recording my memories in external devices actually extends my mind into those devices. This is an interesting idea, but I am not convinced. For one thing, memory in the traditional sense seems more dynamic a process than simply recording thoughts into a device. Memories tend to occur to me, bubbling up from below consciousness, at appropriate times. On the other hand, memories stored in devices need to be searched for intentionally. To access a stored memory I would need to have an idea of what I'm looking for prior to searching for it. The process, therefore, seems to maintain a separation between external device and my mind.

Astute readers will recognize a level of hypocrisy in my thoughts. I am criticizing the written word in writing. And although my historical work was verbal (I never used to write anything down), my arguments were recorded in written form by my students Plato and Xenophon. This criticism is justified. However, I am satisfied that to the extent that people can engage in dialogue with me beneath this article, there is a similarity to what I used to do. So my second complaint above targets books rather than Internet blogs. My other complaints are still relevant and are nicely outlined in this short article in the Philosophy Now publication: Memory and the Internet.