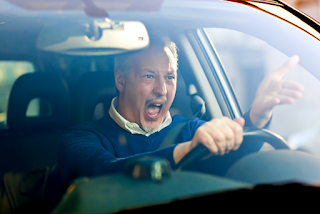 How can people deal with real life situations with wisdom? This question is at the heart of the stoic philosophy and is a natural extension to my own search for wisdom. I have maintained that philosophy should be available to the people rather than remaining with the gods. It is the art of living. So in addition to interrogating people about values, justice, and ethics, I examine their responses to life issues. I am not a teacher, but through dialogue I hope to help people learn how to question their own lives.

Last week I encountered a car accident. The driver who was at fault seemed remorseful. So I took it upon my self to talk to this poor fellow.

SOCRATES: Greetings, I am Socrates. I am a new inhabitant of this fine city. This is quite a scene. Was anyone hurt?

HARVEY: No, thankfully, we are all fine. Our cars are a mess though. I'm Harvey. I can tell that you're not from around here... your accent, and strange fashion sense gave it away.

SOCRATES: Yes, people often find my lack of interest in fashion to be unusual. It is most fortunate that no-one was hurt. These cars do indeed look a mess. What happens next?

HARVEY: I wait. I'll never make it to work today now. I need to wait for the tow truck to collect my car. Then there is insurance to deal with. I think I'll need to talk to the police again too. They've already talked to me, but they said they'd come back over after they have talked to the witnesses. My day is a write off. So is my car. I have just phoned my boss to let him know I'll not be at work today.

SOCRATES: Do you mind if I talk with you? I have no work and nothing but time on my hands. I may be able to help in some way.

HARVEY: Sure. Why not?

SOCRATES: You have mentioned work a couple of times. Is that important to you?

HARVEY: Of course it is. I really need to be at work. The reason this damn accident happened is because I was going to be late for work.

SOCRATES: Forgive the ignorance of this old man, but how can this be so? How can your workplace start time be the cause of a traffic accident?

HARVEY: It's obvious, isn't it. The traffic was slow. Endless traffic jams held me up. This meant I was going to be late for work. Now I'll never get there.

SOCRATES: I understand that a delay in traffic can lead to you being late for work. But I am not clear on how the accident resulted from this.

HARVEY: Don't you see? I drove recklessly. That's how.

SOCRATES: Let us work through this so that I may learn how your workplace start time can lead to reckless driving. You said that the traffic was not flowing well, which meant you would be late for work, is that right?

SOCRATES: You may be surprised to know, my fine fellow, that there is reasoning behind your thinking. You have made a logical deduction:

HARVEY: That's what I said.

SOCRATES: Why did you think you'd be late for work?

HARVEY: Because I leave home at 8am, I need to be at work at 8:30am, and in this traffic it is bound to take at least 50 minutes. So it's really obvious.

SOCRATES: I see. Is today busier than normal?

HARVEY: No. It's always like this. I always end up having to take risks to get to work in time.

SOCRATES: Again, forgive my ignorance, but if it is always like this, then why not leave home at 7:40?

HARVEY: I really shouldn't have to spend 50 minutes in traffic to get to work when I live so close.

SOCRATES: When you use the word "shouldn't" it sounds like you think there is a way the world should be.

HARVEY: You're damn right. The traffic should flow smoothly.

SOCRATES: I'm not so sure. Some people say that only the gods decide how the world should be. Others say that forces of nature beyond the control of individuals determine how the world is. In the case of traffic, it seems to me that there are so many factors involved that it is implausible to expect it to be a certain way. The world doesn't tend to conform to our wishes. But we do have wishes, nonetheless. You wish the traffic would flow smoothly. That is your preference.

HARVEY: Yes it is.

SOCRATES: But often reality doesn't match our preferences, does it?

SOCRATES: Tell me, why does it matter if you are late to work?

HARVEY: I can't just turn up to work whenever I want. I need to be there on time. If I'm late, my boss will be angry and I'll be behind schedule all day.

SOCRATES: I see, and due to the traffic you have already deduced that you will be late, so your conclusion is that your boss will be angry and you will be behind schedule all day. Your argument now looks like this:

SOCRATES: Not quite. Are you sure your boss will be angry? Is there another way to look at things?

HARVEY: I don't think so. He is strict.

SOCRATES: You don't think it is possible that your boss might sympathize with your unfortunate traffic problems and offer to help with your scheduled work?

HARVEY: Haha. Unlikely. I've seen him get angry with people for being late and I see no reason why he would be more lenient with me.

SOCRATES: Perhaps I should one day visit your boss. I would very much like to understand his thoughts. But I am now here with you, so it is your thoughts that interest me most.

HARVEY: This is worse than the police interrogation that I endured a few minutes ago.

SOCRATES: Shall we stop?

HARVEY: No. I find it strangely useful to talk at the moment.

SOCRATES: Dialogue can be very useful. We are social beings that like to talk. You said that your boss will be angry if you're late. Isn't it his decision how he reacts to your lateness? You can't do anything about what he thinks, so why should it bother you?

HARVEY: It's quite simple, Socrates. I can't just ignore the possibility that he will be angry. If my boss gets angry with me for being late, it will be because he thinks I'm worthless and he might fire me. That would be the worst thing that could happen to me.

SOCRATES: Well done, Harvey. You have identified the fourth premise in your reasoning. Given the logic of your deduction, I believe we have the conclusion. Shall we review your argument:

P4. (Premise) If my boss is angry with me, he must think I'm worthless and might fire me, and that would be the worst thing that could happen to me

C3. (Conclusion) My boss will think I'm worthless and might fire me, and that would be the worst thing that could happen to me (feelings of anxiety and anger directed at traffic) (from C2, P4)


Your conclusion is accompanied by feelings of anxiety and anger directed at traffic because you believe it is the traffic's fault that your boss will think you're worthless and might fire you.

HARVEY: That is it in a nutshell, Socrates.

SOCRATES: But we have already established that the traffic isn't entirely to blame, haven't we?

HARVEY: I suppose so. I could leave home earlier.

SOCRATES: Let us take a closer look at your fourth premise. You say that being fired would be the worst thing that could happen to you. Do you really believe that?

HARVEY: Yes. It would be terrible.

SOCRATES: Worse than dying in a car accident?

HARVEY: Ah, well, maybe not the worst thing then.

SOCRATES: It is easy to catastophize. I suppose it is human nature. But for any negative outcome it is always possible to think of a worse outcome. Answer me this: are you worthless?

SOCRATES: Do you have a family?

HARVEY: Yes. I have two children.

SOCRATES: Do you care for them?

HARVEY: Of course. Most of what I do I do for them.

SOCRATES: Would a worthless person care for their children?

SOCRATES: So you are not worthless, regardless of what your boss may think--assuming that he would think that, which we do not know with certainty.

HARVEY: I see your point. But I can't afford the risk that he will think I'm worthless or fire me for being late.

SOCRATES: Yes, and therefore you must get to work on time, correct?

SOCRATES: And yet today you will be later than ever.

HARVEY: I know, I know. All because of my anger and impatience.

SOCRATES: Rather, your fear that your boss will think you are worthless, which led to your anger. What you have just uncovered is a second argument. This argument is the deduction that led to your risky behavior:

P1. (Premise) My boss must not think I'm worthless or fire me

P2. (Premise) If I can get through this traffic, my boss will not think I'm worthless or fire me

C. (Conclusion) Therefore, I must do whatever needed to get through this traffic (from P1, P2)

SOCRATES: Is it possible that your boss's opinion of you might be worse if he knew the risks you take to get to work? Would he admire you for putting lives at risk?

SOCRATES: You know that things may have turned out differently here, don't you?

HARVEY: Yes. I could have been killed.

SOCRATES: And other people could have been killed.

HARVEY: Who are you? Where did you come from? I didn't see you on the sidewalk before the crash.

SOCRATES: I am a lover of wisdom. It looks like your local lovers of traffic enforcement are returning. I shall leave you to talk with them. Live well my new friend.