Is the origin of morality to be found in nature? 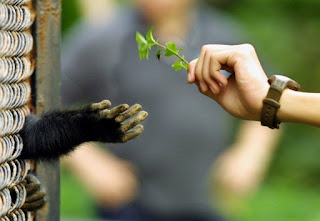 Evolution, I have been told, is based on the mechanism of natural selection. Nature selects behavior that enhances survival and reproduction. This behavior permeates through the population. Dawkins suggests that moral behavior, such as altruism, enhances survival. When people help other people, they in turn are helped. This enhances their chances of survivial. As a lover of wisdom, I crave clarity. So to satisfy the craving of this old man, let us express Dawkins’ argument in syllogistic form:

Premise #1: If I want to survive, I need others to act altruistically towards me

Conclusion: Therefore I should act altruistically towards others


This argument does indeed demonstrate that we should act altruistically — if, of course, we accept the premise that we want to survive. Dawkins then moves from this example to a new argument about how we explain the origin of morality. He argues that since the origin of moral behavior such as altruism can be found in evolution, there is no need to look to the gods for an explanation of morality. I have heard his supporters praise this conclusion as significant and revolutionary. Indeed it is a significant conclusion from a most admirable scientist. But the revolution occured many centuries before Dawkins’ birth.

I remember talking to an interesting young man at the court of Archon Basileus while awaiting my pre-trial hearing. This was back in Athens around 399 B.C.E. The young man's name was Euthyphro. During our discussion a seemingly simple question emerged—a question that, when answered, revealed the separation of the gods from morality. I shall put the question in terms familiar to people of this century: Are actions moral because God commands them; or does God command actions because they are moral? This question exposes a most interesting dilemma. There is no way to answer the question sensibly. If we suggest that actions are moral because God commands them, then moral goodness is arbitrary. God could command that torture is good, and it would thus be good. But would we not find such a commandment to be abhorrent and not the sort of thing God would command? On the other hand, if we answer that God only commands actions because they are moral, we find ourselves with a God that has to check some measure from beyond himself before issuing commands. Thus, God would not be the source of morality. He would be reduced to the deliverer of moral wisdom that he must, himself, seek out.

I would very much like to become Richard Dawkins’ student. I should like to ask him a question similar to the one I asked Euthyphro. Are actions moral because they evolved; or did they evolve because they are moral? Again, it seems to me that either way we have a problem. We certainly wouldn’t want to think that actions are moral just because they evolved. This answer suffers the same problem of arbitrariness that Euthyphro and I discovered all those years ago.

Premise #1: If I want to survive, I need to reduce competition for resources

Premise #2: If I want to reduce competition for resources, I need to kill my competitors

Conclusion: Therefore I should kill my competitors


This conclusion is enacted by many creatures on Earth. We may agree that it is biologically effective, but we surely would question whether killing our competitors is morally good. So the mere fact that behavior has evolved does not guarantee its moral worth. The reason the first version of the argument looks good is because we have reasoned that altruism is morally good prior to discovering an evolutionary explanation for it. The wise Dawkins agrees with this point. He tells us that he doesn't advocate a morality based on evolution. He has simply demonstrated that our moral behavior originated in evolution because it helps our survival.

Answering the question in the other way is also problematic. Suggesting that evolution produces behavior because it is moral implies that evolution acts with reason and moves towards external moral goals. If this were true, evolution would not, itself, explain the origin of morality. Besides, Richard Dawkins would remind us that evolution does not move towards end goals.

So what are we to conclude, my dear readers? Perhaps only this. The origin of morality is not to be found with the gods and it is not to be found in evolution. It is through reason that we identify moral goodness. As to where it originates, I fear I have no answer.